How To Acquire Knowledge Of Seemingly Impossible To Know Things? 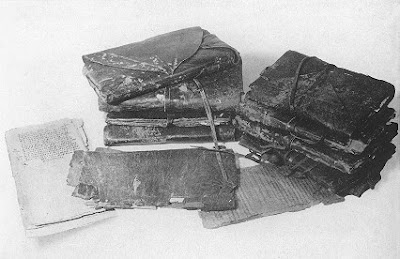 How to get the answer to something seemingly impossible to know? For example, looking at the leatherbound codices of the Nag Hammadi Library find, we see they look rather modern.

Whence did those writings come from then?

For instance, why do I not find that type of writing anywhere earlier than the last 1 A.D.? One after death. Death of whom? Would our calender start at the point of the death of some guy named Jesus, well then why would I not find works of this sort before this Jesus character came to Earth and left. So what are these codices when they talk about the most significant part of existence, the beginning? Who really left these there, sealed in a jar? Who really wrote this 'literature' taken such good care of by those preservers?


It sometimes becomes confusing. The Pleiadians who ever they are, have told us, the use of the intellect over-much is not good. O.k. So let's take it to the intelligence part then. We'll use the intelligence instead. Therefore, would this be something to know about, it would find its way into the knowledge of a person who desires to know. Would one not have any interest in it, there could be a gold mind just under their house and they be not interested in it...not a problem. Those who are though, when you find a gold mine under your house, you dig into it and begin to use that part for the necessary piece of existence...which says, once you know, you must use it.

Wherefore. Chain linkin it doesn't work. This living language library is free. It goes where ever it desires to be. It shows itelf to whom ever desires to see. It is all there for the knowing. Tis beautiful. The question may be answered, even though not to the satisfaction of my ego.
Lol!
---------


﻿The Predator's Pact
Posted by BELIALITH at 8:31 PM