Jason Reza Jorjani And The Purpose of Symbolic Myths.

"On the other hand, Hedayat's approach to the folklore of Iran in particular runs counter to this scholastic naturalism and psychologizing, with its aim of exorcizing ignorant people of superstitious and regressive traditions. First of all, any naturalistic reading of his approach to folklore should be checked by his thesis that enterprising individuals construct the formal structures of knowledge in any culture from out of the deeper stratum of folklore by translating this lore into principles and precepts. In such a view, sociology and social psychology, as rationalistic sciences, can never encompass folklore in a purely reductive and eliminative manner. Hedayat had already taken this view in Owsaneh, where he not only sees folk songs as the most primordial expression of the soul of a people, but as a force that can assimilate scientific and technological advancements in a way that fosters progress while keeping a civilization rooted in its primordial spirit. He notes the German origin of the word Volkskunde, where kunde means not just "lore" but "history" in the deepest and most originary sense possible (as compared to historiography).

Furthermore, it is fairly clear that in Neyrangestan,
Hedayat is only intent on exorcising the Iranian Volk of foreign lore that has infected their ethos with deleterious and degenerative attitudes in the course of the many conquests and migrations Iran has suffered as the crossroads of the Earth.

He draws an especially sharp contrast between the Aryan lore that forms the most primordial stratum of the Iranian cultural mentality and the Semitic lore that Iranians were subjected to, and eventually psychically subjected by, in the course of several successive waves,
beginning with the Chaldeans and Babylonian Jews, and ending with the catastrophic Arab invasion. The negation of free will through an obsession with astrologically determined Fate, and bloody animal sacrifices that the superstitions the Semitic peoples introduced into Iran to satisfy their terrifying egomaniacal divinities, particularly aggrieves Hedayat, who takes note of the fact that --as both Zarathustra and Siddhartha Gautama attest-- such inhumane sacrifices were alien to Aryan spirituality, whose cornerstone is the faith in free will or personal choice and spiritual cultivation based on conscientious discernment. He is also indignant that the Semites, and even Persian-language writers brainwashed by them, have co-opted and re-written so many ancient Iranian folktales in such a way as to attribute the valorous deeds of heroes such as Jamshid and Rostam, to the likes of King Solomon, in an apparent attempt to divest the Iranian people of their historical consciousness --as if conquering their land did not suffice.

Even whole Persian masterpieces, such as the Hezar Afsan of the Sassanian period, that was corrupted into the Arabian Nights or A Thousand and One Nights, have been passed off as Semitic literature after their originals were consigned to flames when the invading Arabs burned down the Sassanian libraries." 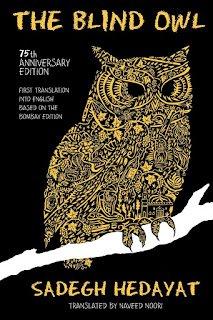 "Specifically, I discern esoteric references to both the kundalini shakti or "Serpent Power" and the Left-Hand Path. I argue that, on one level, Hedayat intended Bugam Dasi to be Shakti in the guise of the Black "Mother" Goddess Kali Ma, and the other female figures often conflated with her are emanations or avataras of Kali known as Mahavidyas in Tantra --by means of which Kali manipulates and empowers Shiva. Instead of being the means to oblivion that Khayyam took it to be, wine becomes an elixir that imbues the narrator with an amoral and maddening Vital Force. It seems that not all of Hedayat's time in India was spent poring over Parsi scriptures.

It is well known that The Blind Owl takes place in two time frames---that of medieval Rey and the city of modern Tehran that has risen from out of its ruins in Hedayat's own time. In the fourth chapter of this study, I argue that it takes place in a third time as well, namely the Future or the Futural (in a quasi-Heideggerian sense) that is a timeless place of no place equally accessible to the past and present. This is the strange futuristic city that the narrator repeatedly wanders into, often while in an altered state of consciousness, both in modern Tehran and in the medieval city of Rey. I would be tempted to call it "Rey City" (as in "Ray Guns" and "Death Rays") if there were not already a name for such a place in the Persian philosophical tradition. That name is Na-Koja-Abad, a word coined by the twelfth-century martyred heretic Shahab al-Din Suhrawardi to mean "The Land of Nowhere," which is located in "The Eighth Clime."

"Will there be a day when someone discovers the secrets of these supernatural events, that reflection of the shadow of the soul that manifests itself between awakening and sleep, in a state of purgatory and unconsciousness?" --Sadegh Hedayat, "The Blind Owl."


Oh totally. This man was doing soul searching. I was doing the same thing, in highschool. After I had become a teenager and looked all around me, still having the vision from childhood of my spirit self, and seeing the others around me lose that aspect very quickly as they became interested in romantic structures and the drone of regular life, job, marriage, career, children, I was noticing there was something drastically wrong with the entire theme. It was as though everyone around me were falling asleep, instantly. That is when I pulled away from the crowd, to specifically do what I called "soul searching." My sister noticing, tried to get me to come back and be the popular girl in school, but I had it with them, and there was nothing more interesting to me than to discover the other world, the one that 'they' were (what appeared to me) trying to hide from our knowing. Oh my, and did I find! Here's the words from Sadegh's novel where I recognized the same structure:

"...for in the course of my life experiences I came to this understanding that there existed a dreadful chasm between myself and others, and I understood that as much as possible one should remain inaudible, as much as possible I should keep my thoughts to myself, and if now I have decided to write, it is only to introduce myself to my shadow--a bent shadow on the wall, and it is as if the more I write, it devours it with an even greater appetite--It is for him that I wish to carry out an experiment: to see if we can come to know each other better--because from the time that I cut myself off from others, I have wanted to know myself better."

Posted by BELIALITH at 2:33 AM