Human blood drinkers, flesh eaters, they shapeshift into their Reptilian form at ceremonies where humans are murdered in front of them. When the human's blood begins to pour the 'Reptile royal family' of England begin to shapshift into their 'true form?' which is Lizard-like. They're supposedly very ugly, approximately 7 feet tall with claws on both hands and feet, with fangs, scales, you name it. This is out of a few different people's stories. I don't know what to believe out of it all. You have to make up your own mind too.
With all this I've read, would it to be the truth, then I wonder what would happen would the queen of England be on tour and someone had an accident in front of her, hahaha, where their blood spilt. Would she turn into a reptilian in front of everyone?!... There then would be the evidence for those of us who still have no clue about what's going on. And to tell you the truth...I still have no idea what these stories are all about. Anyway...

Check out this video. Arizona Wilder talks about the Vampire Windsor royal family, how they conduct themselves behind the scenes:


Arizona Wilder Talks About Mind Control and the Reptilians. 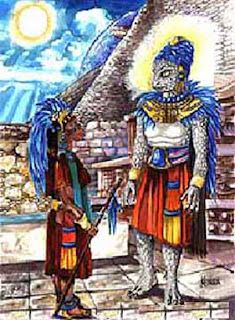 ﻿The Predator's Pact
Posted by BELIALITH at 9:53 PM