Here's an excerpt from the book The Biggest Secret by David Icke. To read the whole book click on the link.

Summarising all the research I have read, the people I have met, and the accounts of
those who claim to have experienced these reptile humanoids or reptilians, the following appears to be the case. There are many sub and crossbreed races of the reptilians.

Their elite is known by UFO researchers as the Draco. These are the ‘big boys’ in every sense and they are usually between seven and twelve feet tall. They have wings which are flaps of skin supported by long ribs. The wings can be folded back against the body and they are the origin of the term “winged serpent”. They are also the origin of the term ‘fallen angels’ and the winged gargoyles are symbolic of these Draco. The cape worn by Count Dracula is symbolic of these wings and the character of Dracula in the Bram Stoker stories is said to be a fallen angel. The winged Draco are also known as the Dragon Race and some of the ancient gods were described and depicted as birdmen. This could be one of the origins of the Phoenix and eagle in Brotherhood symbolism, as well as the more esoteric meanings. The biblical Satan is depicted as a reptilian, too.

Some of the Draco reptilian hierarchy are apparently white or albino white and not
the usual green or brown, and this connects with the description of the strange ‘albino’
lizard humanoid in the building in Aurora, near Denver. The Draco are the ‘royalty’ of the reptilians and the highest caste are the albino whites, who apparently have conical horns midway between the brow and the top of the skull. This struck me immediately because the ancient ‘gods’ and royalty were depicted as wearing a horned headdress, symbolic of these ‘royal’ reptilians, I’m certain. Other species, like the soldier class and scientists, are known as Reptoids. They don’t have wings, but all of them are coldblooded.

Their scales are much larger on their backs and they have three fingers with
an opposing thumb. They have three toes with a fourth towards the side of their ankle
and their claws are short and blunt. They have large, cat-like eyes which glow red and a mouth that looks more like a slit. Some have eyes which are described as black and
others are white with flame-coloured vertical pupils. Again this is what the lady
described in the Aurora case. The reptilians are five to twelve feet tall and they are the
‘giants’ described so widely in the ancient legends and records. Some have tails, others
do not. One of their other planets of influence long ago is reckoned to have been Mars
and so were reptile crossbreeds among the white Martians even before they came here?

Zecharia Sitchin also speculates that the Anunnaki went to Mars before coming to
Earth. This would certainly fit the picture and it could well be that the white Martians in Brian Desborough’s scenario and the Annunaki have long been genetically connected.

A high priestess of the Brotherhood hierarchy who has broken out of their clutches, at
least at the time I spoke with her, says that the reptilian Anunnaki invaded Mars long
ago and the white race of Martians eventually left that planet for Earth. The Anunnaki
on Mars followed, she said, although I have no doubt that some are there now in
underground bases. Whenever one of the NASA Mars probes is in danger of letting the public see something they shouldn’t, the link mysteriously goes down or the probe
disappears altogether.

What is without question is that the white race, whatever its origin, has been the main vehicle of the Anunnaki crossbreeding programme for the takeover of Planet Earth. Researchers believe that the reptilians are the controllers of the so-called Greys, the classic extraterrestrial figure of modern times with their big black eyes. The Greys feature in most of the abduction accounts.

Jason Bishop III in his writings on this subject says that the hierarchy of control is: Draco (winged reptilian); Draco (non-winged); Greys; Humans. There also appears to be a reptilian ‘alliance’ with some other extraterrestrial groups.

It is suggested that human sacrifice to the ‘gods’ in the ancient world, particularly
of children, was for the benefit of reptilians who demanded these rituals (a trait of the
reptile brain is ritualism). I am sure this is true and it will be extremely relevant in the latter part of this book.

At the moment of death by sacrifice a form of adrenaline
surges through the body and accumulates at the base of the brain and is, apparently,
most potent in children. This is what the reptilians and their crossbreeds want, it is
said, and they certainly feed off human blood and flesh.

These ancient sacrifices were literally to the gods, the Anunnaki reptilians, and they continue today. The common theme of all research into the reptilians is that they are emotionless and without sentiment and, at the fourth dimensional level, they feed off the energy of low vibrational human emotions like fear, guilt and aggression. When we emit such emotions their energy can’t be seen in this world because it resonates to the lower fourth dimensional frequency and there it is absorbed by the reptilians. The more of these emotions that can be stimulated, the more energy the reptilians have to work with.

Thus we have the encouragement of wars, human genocide, the mass slaughter
of animals, sexual perversions which create highly charged negative energy, and black
magic ritual and sacrifice which takes place on a scale that will stagger those who have not studied the subject. 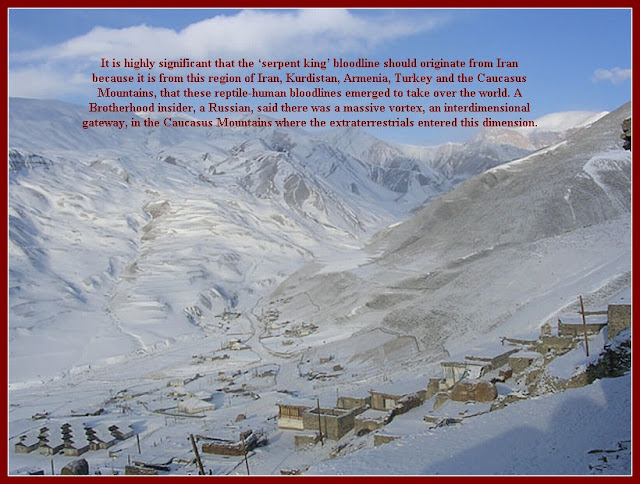 The Predator's Pact﻿
Posted by BELIALITH at 2:41 AM