"So when will this happen? Not exactly sure, I do know that between now and fall of
this year huge events are going to occur, some absolutely wonderful and some not. I
also want you to know that the Andromedans are very concerned about the earth
moving through this gravitational plasmic field, which we call the galactic plane, it is
their concern that the planet itself when it hits it, because of its vibration, its
frequency is going to bounce off of it at first creating a huge global quake.

There have been discussions as to whether to intervene, to, in other words, align
something in front of the earth to open the pathway through it, or to allow this to
occur naturally. The natural part is this, when the earth moves through the galactic
plane the  Schumann Resonance of the planet is going to change. It is going to
become much much higher than what it is right now." 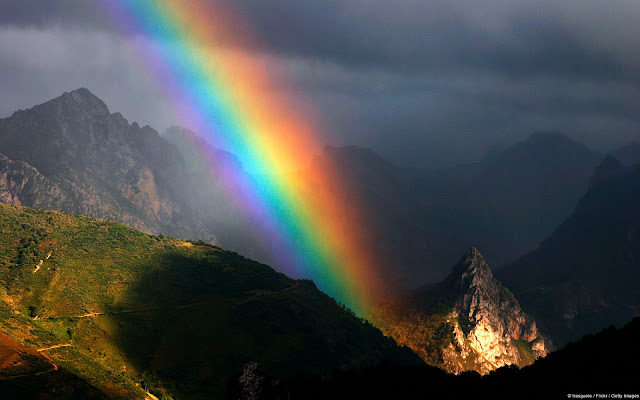 Aqua-marine in the rainbow. The black hole is emitting a frequency never known before in the entirety of this Universe. The frequency and sound comes across as the colour aqua-marine on the planet Earth. Match that colour and that frequency and we shall go softly and smoothly into the plasmic field like a soft cuddly hug.

This is purely spiritual work. For months now, I've been seeing 11, 22, 33, 44, 55, 66, everywhere. Many times throughout the day I turn without thinking and I look and catch myself seeing the clock with those numbers straight, or mixed, and every time I am reminded I have this spiritual work to do. So I was being prepared and preparing myself.

And about the right and left, above that is the balance which combines them. Aligns, combines, balances. A few months ago with my friend Michael in the room, I had another vision. I saw the left side and the right side on the ground, and I saw just above it the combination of them all into one, which created a complete being, and complete BE ing. Back on April 6, 2006 Christ had come to show me a very long vision with many parts to it. One part of the vision was that I saw myself standing with one foot on the left side where it was black and as it approached the middle was red, with a bunch of black demons all crowded around the thin dividing line trying to get past it, and I had one foot on the other side which was a looong span of green grass before I saw people. There were some people with kids at a swing-set and walking around under a blue sky with white clouds, nowhere near that middle line. I saw how very tall I was, tall as a building, and I was completely dressed in black robes. The middle was a very thin line like a thread passing all the way to infinity, in between my feet which stood one on each side of the line.

I've wondered all these years about the meaning of that and now it is becoming clear to me. The balance! So everything now is about working spiritually and in the balance, to return this company back to it's true origin. They were split. And now we move through the galactic plane. Keep it balanced.

And now I feel this puzzle is fitting together. My younger sister passed away 95 days before and into Dec. 21, 2012. My older sister passed away 96 days after, both counting Dec 21, 2012 and the day they passed. Both died of the same thing, breast cancer that turned into bone cancer. Both of them were in the hospital exactly 10 days. My younger sister was buried on September 22, 2012, Autumn equinox. My older sister was buried March 20, 2013, Spring equinox. I am in the middle, and am Here. I still don't quite see exactly what it means, but I have the pieces of the puzzle and they ARE fitting together.

And I was reading a few days ago about the power of the strength of the fire and the ice. I thought to myself how I resemble the middle, being the one side and the other side all together. So the next equinox is Summer. My two girlfriends, who I wrote a blog about just before my sister Molly went into the hospital, those two girls I met when I was 16. Aurora was saying that day how we have made plans before we came to Earth, that there are those who are meant to meet. And here we were and I had always felt a strong connection to her. So when I met Susan back in 2000, I immediately thought of Aurora and felt that she was sending me her helping hand. So we made friends and then from the time I was 16 I hadn't seen Aurora until that day, I wrote about it in the blog. We made a pact between ourselves to meet on the Summer Solstice. So what's the Winter Solstice suppose to mean? I sure hope it means peace and rest from all this, haha, hardship. That the planet(s) and the children of Father will be finally free, and I could finally take my rest back into the silence.

"Ra describes the matching of a soul to a density as consisting of a walk towards an increasing brightness of light. The soul stops at the point where the light is too intense. There are discrete steps corresponding to the boundary between densities."

O.K. now, I have an explanation for this. While I was living here as a girl, at about the age of 17, I fell romantically in love with an invisible being. I had a reaction to him which made me to shiver so that I feared getting any closer to him. So this would be an example of how the children would be toward the light in the 'regular' stage they've been living in. Well in order for me to overcome that problem, to find out what was causing it, I had to face it and then with the help of other beings telling me to take one little baby step at a time, I discovered by consistent effort what exactly was causing it, and how to alleviate it.

The thing is, it was not I who was frightened of love, or any romantic love, it was the surface ego, the physical way of being. So what I did was I pushed myself to look closely at every instance where I began to shiver or have nervous shakes. I found that it was due to any deeply emotional spiritual experience. There I found that the ego was frightened. It loses it's comprehension of what is happening and therefore it tends to back away unthinkingly, like an animal running away. What I did was to show myself that spiritual side of emotions in a softer pleasant way so as not to decimate the ego. Thus the ego became less frightened and began to peer into what it was that had been causing it the distress everytime it felt that strong love emotion in its viscinity. Then I began to join my ego self to the higher self. Understanding came to the ego self and no longer was there such a fear in it. Same with the inhabitants of the Earth, being so long away from the strong light of love. They were taught that romantic love was real love, but it wasn't real love. And parental love was selfish love, same as friendship love, because everyone was in it for their own self, meaning 'survival.' It escaped their eyes that this was incorrect because they were taught to fear anything else as an enemy, subconsciously. So when they had to face the truth, the truth was so bright it hurt. Like the light hurts the eyes when you wake up in the morning and the sun is shining in the window.

So what we have to do now is to focus on the being within the being. Instead of thinking of the person in your thoughts as the outer person, you must think in your thoughts of the inner person who has an ego on the outer shell. That way you strengthen the inner being and they are capable of dealing with the realm border crossing. The light will not be as intense as were you to be only seeing them through the thoughts of their surface ego. So by exercising your creating ability through seeing them in your mind as who they truly are, even would they to not recognize their own self at the time, you will be helping to strengthen them for the crossing. Thereby we can be prepared for some surprises because I have seen the utter genius in Father's Children and they, just like Father, are full of surprises. So let's help them out by strengthening them from our way of looking at them. It's like the story of some guy who totally believed in some lady who never believed in herself because society had judged her and she just went with society's judgements. But when he came along, he saw a completely different story, loved her so much so that he influenced her to see herself as he saw her, and then when she truly did see herself, she saw how wrong society was about her, and she found her self-esteem. Let's give it a whirl. Hahaha....I like spirals and swirls and whirls. Good stuff!


"The best way of service to others
is the constant attempt
to seek
to share
the love of the Creator
as it is known to the inner self."﻿