WhiteHouse Pedophiles Still Walking Around, Still At It. 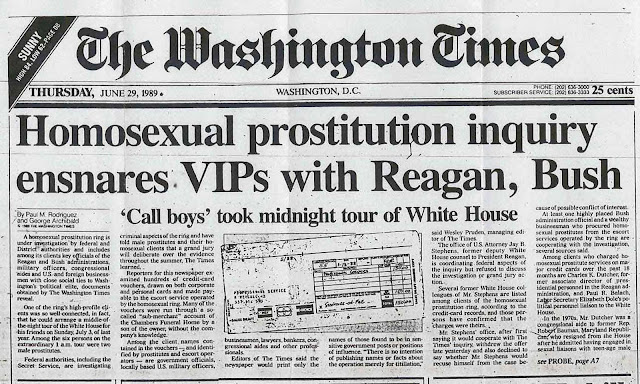 The Justice Department, acting through the FBI and the U.S. Attorney’s Office in Omaha, emerges from the record of the Franklin investigations not so much as a party to the cover-up, but as its coordinator. Rigging grand juries, harassment of witnesses, incitement to perjury and tampering with evidence -federal personnel were seen to apply all of those techniques in the Franklin case. (John W. DeCamp, Esq., The Franklin Cover-up, Second Edition, January 2005)

Bless the Beasts and the Children

Nelson was allegedly employed by a former Republican Party activist to take pictures of current or retired U.S. House-Senate members and other prominent government officials engaging in sexual criminality by receiving or committing sodomy and other sex acts on children during the Reagan-Bush 41 administrations.


Hunter Thompson’s death and the news blackout of Rusty Nelson’s simultaneous arrest raise questions that someone may be attempting to limit Nelson’s freedom or threaten him, since according to testimony, both men had allegedly witnessed homosexual prostitution and pedophile criminal acts in a suppressed but far-reaching child sex-ring probe closely linked to Senate and House members--but also former President George H. W. Bush. [In U.S. District Court testimony, Rusty Nelson told Judge Warren Urbom he took 20,000 to 30,000 pictures, 2-5-1999, p.52]

Pedophile victim Paul Bonacci--kidnapped and forced into sex slavery between the ages of 6 and 17--told U.S. District Court Judge Warren Urbom in sworn testimony [pp.105, 124-126] on February 5, 1999: "Where were the parties?...down in Washington, DC...and that was for sex...There was sex between adult men and other adult men but most of it had to do with young boys and young girls with the older folks...specifically for sex with minors...Also in Washington, DC, there were parties after a party...there were a lot of parties where there would be senators and congressmen who had nothing to do with the sexual stuff. But there were some senators and congressmen who stayed for the [pedophile sex] parties afterwards...on a lot of the trips he took us on he had us, I mean, I met some people that I don't feel comfortable telling their name because I don't want to --- ...Q: Are you scared?...Yes..."

DeCamp, a former Nebraska state senator and decorated Vietnam War vet, told TomFlocco.com "there are tons of pictures still left; law enforcement is currently looking for them," adding, "you can also assume there are senators and congressmen implicated; otherwise this would not be such a big issue."  But no federal official has stepped forward to protect Rusty Nelson's life, as Congress would be reluctant to hold hearings or force a federal prosecutor to probe its own members for sex acts with children--still punishable by law.

In his testimony before Judge Urbom, Bonacci specifically named Congressman Barney Frank (D-MA) as having participated in the parties--also telling the judge he had "relationships with him" in Washington, DC and was flown to Massachusetts for sex in the basement of Frank's Boston home.
[2-5-1999, p. 126]

However, Urbom did not subpoena all the photos and did not ask Bonacci to identify photos of specific senators and congressmen, or reveal their names in court transcripts and depositions we examined; nor did Judge Urbom explain why investigations have never commenced regarding which members of congress had sex with children.

The evidence DeCamp presented was so credible and substantial that Urbom awarded Paul Bonacci $1 million for child abuse on February 19, 1999 regarding his lawsuit involving Larry King. This, despite a Nebraska jury having already indicted Bonacci for perjury in 1990, ultimately sending an intentionally damaged, spiritually and physically abused young man to prison for five years--and despite his treatment by King, described in court testimony:

"They put guns up to my head. Had guns put in my mouth...Larry King sent out boys, men, to jump me...he had them pretty well beat the tar out of me from the waist down so nobody would see the marks...I had my fingers broken...I can remember them burning me with hot instruments...placing stuff inside me...almost what I call a cattle prod...But it would be put inside then they'd shock me inside my -- ...Judge Urbom: Anus?...Yes... And they would -- ...Judge: You mean electrically heated?...They would put it in and then push a button and it would shock me...Judge Urbom:..done by Larry King at his direction?...At his direction..."

"I threatened to go to the police in California, thought maybe they would listen whereas in Omaha they were in his pocketbook...he had me hung out of an airplane with a rope by my ankles...If they wanted to get something passed through the legislature, he would put some people that were against it in a compromising position. By using us boys and girls...Judge Urbom: Was this by your being the sexual partner of that person?...Yes...Judge Urbom: ...Any estimates of how often you participated as the sexual partner of one of these persons that he wanted to get some kind of control over?...There were times when it would be four or five in a night...on probably a couple thousand times...sometimes dozens of times with the same person..." [U.S. District Court testimony, 2-5-1999, pp. 146-151]

Curiously, Paul Bonacci told investigators that the sex ring was based out of Offutt U.S. Air Force Base near Omaha, having been taken there to be abused since he was three years old in 1970. At Offutt, Paul said he was "trained" by tortures, heavy drugging and sexual degradation. [Offutt AFB played a major role immediately following the 9/11 attacks as George W. Bush made the base his post-attack headquarters for a short period.]
So intent upon his physical harm, the government "moved Bonacci to different facilities--despite agreements worked out by DeCamp, purposefully gave him food to which he was allergic while his weight dropped, and denied him a blanket for months...[he was] beaten several times in jail and placed with potentially violent people associated with Larry King," according to Decamp.

John DeCamp told us last week that "Larry King was released from prison on April 11, 2001 after serving about five years," adding "he's back in Washington, DC and now involved in this story again."  [DeCamp's book also said "King went to prison for embezzlement, conspiracy and making false financial record entries...there was no trial on any other charges, and the evidence of child prostitution and abuse perpetrated by King was never presented in any court."  Franklin Cover-up, p. 224]
John DeCamp just released an updated 2005 edition of his original book about the secret White House-linked national child sex-ring entitled The Franklin Cover-up [$12.95 + $4.00 shipping: contact decamplegal@inebraska.com for 2005 edition]. The carefully researched and graphic expose involves convicted [and recently released from prison] GOP operative Lawrence E. "Larry" King Jr. who allegedly hired photographers to capture legislators and high officials in compromising sexual positions with children while he managed the Franklin Federal Credit Union--according to court testimony on 2-5-1999. [Franklin was raided by federal agencies and shut down two days before George H. W. Bush was elected president in 1988.]

Past mysterious deaths, clandestine arrests, court testimony, and credible evidence of FBI and CIA participation in their cover-up also raise questions as to why elderly pedophile priests are removed from their pulpits, prosecuted and imprisoned for sex acts committed 40 years ago and why famous music entertainers are prosecuted for pedophilia; yet elderly pedophile federal legislators may still remain in the U.S. House and Senate--drawing a free pass for past criminal child-sex acts.


Regarding his role in taking blackmail photos of government officials, Rusty Nelson confirmed Bonacci’s testimony to Judge Urbom: "Q: Children on the airplane?...yes. Q: How young?...There was one situation went back to Washington, DC...he had probably 10, 12 years old...Q: Boys, girls?...Both...Q: Who attended the parties?...Prominent business.........

Continue at The U.S. House and Senate, drawing a free pass for past and present criminal child-sex acts