Ha Ha Ha Hahhaha...OhK, Those Light Beings Are On My Tail Again.

Why thank you! Yes my birthday is today. Hahaha. So you found me, again. How do I ever hide in this great big bright world? Hmhmhm...


Cute! 7 candles, and 5 candles. What's that mean all put together? Ohpe, plus one! 2013! The year of the Black Snake in Chinese. Do you know they're selling Chinese year of the Snake Coins in Windsor's post offices? That's unique. Hahaha. I too was born in the year of the Snake.

Well, it was very nice of you.

Now, let me hide in the darkness again, thou light beings thou thou....

So here we are back at work. I was just reading  Materia Prima: The Nature of the First Matter in the Esoteric and Scientific Traditions and found some interesting coincidences so that I decided to put an excerpt in here to take a closer look at it. 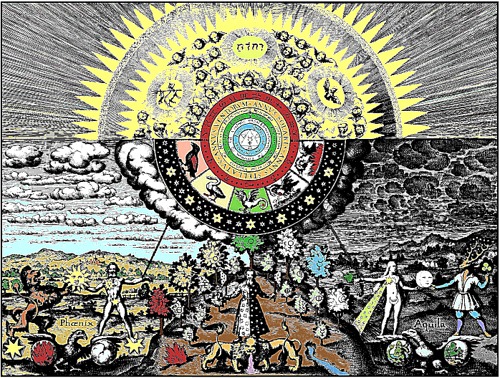 I was spending a lot of time in the library tracking down published papers about Gödel’s
work, when one day I discovered a basement storage room of old alchemy manuscripts
dating back to the sixteenth and seventeenth centuries, a period when Vienna and nearby
Prague were the center of alchemy in Europe.

I was really taken in by the symbolic images in these old books, and one of the most
intriguing was a Rosicrucian engraving by Matthieu Merian called Tabula Smaragdinas
(“Emerald Tablet”). It was said to contain all the principles of alchemy in symbolic form,
but what I saw in the engraving was a profoundly accurate representation of Gödel's ideas.
Interpretations of the drawing even used some of the same terms Gödel used in his later
work.

The engraving depicts the birth of the Philosopher’s Stone from the First Matter as it leaves
heaven (the spiritual realm of energy above) and is projected into earth (the material realm
below). The first thing that strikes one about the picture is its sharp division into the Above
and the Below.

In the Above, the larger Sun of the One Mind, whose rays encompass the whole universe,
rises behind the Sun of Heaven or what is known by Hermeticists as “Mind the Maker.” This
intermediate Mind the Maker is like an archetypal computer or matrix dominated by twentynine
cherubs or archetypal forces, which can be seen as the crystallized thoughts or Word or
Thought of the Divine Mind carried in the light from the One Mind.

The three smaller Suns floating amongst the angels represent the three heavenly substances
expressed as the Holy Trinity. The center sun is the Tetragrammaton or “Ineffable Name of
the Divine Mind” written in Hebrew; to the left is the sacrificial Lamb; and to the right is the
Dove or Holy Ghost hidden in matter. Any alchemist of the time would recognize these as
the Three Essentials or the alchemical principles of Sulfur, Mercury, and Salt respectively.

The Below is divided into the daytime (solar or masculine) left side and the nighttime (lunar
or feminine) right side. This division on the horizontal axis represents the created world
mirrors, the split of the human brain into left hemisphere (logical masculine consciousness)
and the right hemisphere (feeling-based artistic feminine consciousness).

At the lowest level of the material realm are the Four Elements. Centered between them is the
fifth element or Quintessence depicted as a hermaphroditic alchemist holding up two starry
hatchets, which represent the higher faculty of discernment. The alchemist has cut the chains
of unknowing that tied Sol and Luna to their duality and balanced the powerful forces of their
separate sexualities. He has seen through the Clouds of Unknowing and realizes the powerful
influences of the archetypal powers Above. The empowered alchemist is symbolic of a
successful integration of the opposing horizontal forces to his left and right.

The alchemist stands on two lions who have a single head, which signifies the taming of the
First Matter. The lion on the left is the red Fire Element Lion, and the one on the right is the
green Water Element Lion - the alchemical union of Fire and Water. The alchemist is now
able to enter the hidden vertical axis of reality.

The first area encountered as the alchemist travels along this vertical axis is the Ring of Stars
in which seven larger stars predominate. This stellar ring presents the cosmic or universal
archetypes embedded into the fabric of reality. This ring is followed by a semicircle of five
scenes representing operations that lead to the Philosopher's Stone. From left to right: the
Black Crow of Saturn, the White Goose of Jupiter, the Rooster of Mars, the Pelican of Venus,
and finally, the Phoenix of Mercury.

Above the Ring of Stars and the Ladder of the Planets, and partaking of all realms in this
diagram, is a central sphere made up of seven concentric layers. These layers symbolize each
of the stages of transformation that must be peeled away to reach the Stone, which is the
innermost sphere in which a triangle is inscribed with the symbol for the exalted Mercury, the
perfected First Matter. At the middle of this symbol is a single dot representing the Source,
the center of the entire engraving and around which both heaven and Earth—and this
mandala—revolve.