Wow. Thanks to Michael Tsarion we have all kinds of things to read about; the Zionistic Zealots who stole and control the media for their brainwashing tinkering around with humanity. Just what I was interested in knowing a bit more about. Anyway, I've got a hell of a work load to do. Much, much reading, besides even this. Love you all for your help. Thanks. We'll get this one worked OUT hahaha too!


Note: Soon as I began reading the top link, I put the name "Tzipora Menache (menace)" into Google Search Engine and I got this from the top website - Stormfront.org :

"I had sent a number of people a story from the Pakistan Daily about a supposed Israeli spokeswoman "Tzipora Menache" who supposedly said: "We control the stupid Americans. You can criticize God in America, but not Israel." I do not know if she is a real person, but it has been revealed that this news story is a plant by Jews, or Israelis, to attack people who are critical of Israel.
Rense.com says that if you Google "Tzipora Menache" you will find a supposed informational site which will insert a virus on your computer if you click on it. So, DO NOT SEARCH FOR TZIPORA MENACHE ON THE WEB!!! This story is, for certain, a hoax put out by Jews to encourage people who dislike Israel and its actions in Gaza to Google this name and thus pick up a virus." 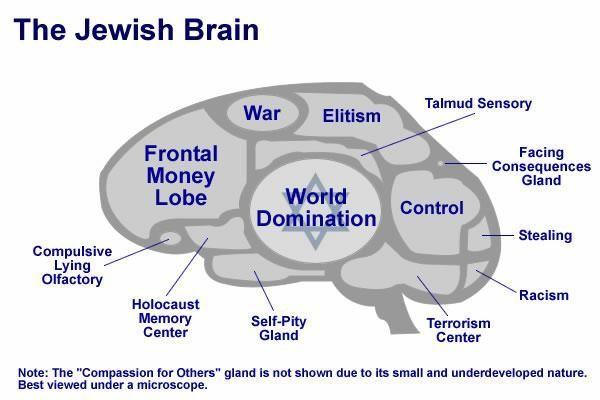 
P.S. People must be careful of becoming racist about Jews because most of them are not Zionists. In fact, some of them are harshly opposed to Zionism, seeing it for what it is, plain and simple, evil.

When you watch this man's three videos, you have to ask yourself.....
What do the Jews and the Negative Aliens have in common?
Well, let me help you a bit. They're both slaves of matter. Spirituality doesn't fit in there, it's just a ruse. Now let me remind you again, I'm not talking about all Jews, only those who are mind-controlled by their controllers most of all. You can see through recent history how everything through media is a load of hogshit. There is so little essence to anything, whether sports, magazines, movies, newspapers, even politics and religion....there is so little essence allowed to be seen. They like to stomp down on anything that might awaken the people to their higher purpose. Therefore, beware of what I am saying here.
Ever vigilant be.

Israel? What's that?
No such number, no such place.
Sweep it out, for it is only a fantasy.
Posted by BELIALITH at 6:55 PM