On, How To Detect Delusion In One's Self

“The greatest mysteries in nature, are by no means difficult to understand. If we only prefer to look at them instead of looking at our own delusions.”

And I was telling those who were saying this, that one has to understand what personal delusions are, before one can understand that saying.

So, personal delusions are... When you go out and your friends are with you...you're all different people, but you seem the same because of the surface. But it's more complex than that. Because even though you have a similar surface, all of you are as unique as a rain drop or a snow flake; there are no two alike. They are all different from one another (like twins; neither is the same as the other, even though they look the same, they are so different, such as good and evil are from one another. Just a saying, mind you. Nothing intended in actuality.)

So you're out with your friends and you see a live band together. One of you sees them naked, the other one of you sees them fully clothed, and the other one sees them invisible...only hears the sound. So, which one of  you is correct? Perhaps none of you saw the band, but only what you thought from your own mind that you were seeing. If you really look at the band, you can see they are neither naked, nor well clothed, nor invisible. YOU have to make the effort to see what's there, before you can even begin to know the truth.

Anyway, that's an example of what those beings were saying in the quote I took out of the book, "With The Adepts," by Franz Hartmann. 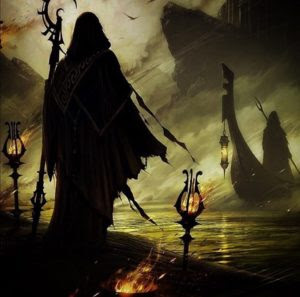 It truly deludes one to see a picture that's been around for so long that they've become so use to it. But, were they to take a closer look, they would be intrigued. And by being so, they might even pay attention to what's being said. And thereby, learn what tree that fruit grows on. Which, hmhm, surprisingly, may help you on the next step...that fruit is very nutritious.

The higher up you go, the more clear it gets. There are no clouds in the way. And all it takes is a swat of the hand to remove those that are below, in the way. Good day.


“This truth, you will find symbolically or allegorically represented in all the principal mythologies and religious systems of the world. It is the old story of the ‘Fall of Man.’ As long as man remained in a state of purity, that is to say, as long as his Will and Imagination were ONE and IDENTICAL with the Will and the Imagination of the Spiritual Creative Power in Nature.... he knew the truth, and was all powerful. But, when he began to think and imagine in a different way, from that universal power, he lost sight of the truth and could see only his own fancies.

If man wants to see the truth again, he must give up his own way of reasoning, and let Reason act in him. But, you may as well ask a miser to give up the ‘treasure’ which he has collected and hoarded during a lifetime, as to ask a modern scientist or philosopher to give up his own crooked ways.     I see in your heart a desire to establish a secret society; but let me warn you that, if you attempt to accomplish this by appealing to those who are clever and cunning, vainglorious and proud of their own attainments, full of ambition and anxious to come into possession of occult or magical powers for the purpose of gratifying their scientific curiosity, or to employ them for the fulfilment of some selfish desire, you will certainly fail. For it is written: “Whosoever hath, to him shall be given and he shall have more in abundance (YAY hahahaa), but whosoever hath not, from him shall be taken away even that he hath.” (Yay hahahaa).
(Same book)

Posted by BELIALITH at 1:15 PM