You can tell by the entire Aquarian outfit, that they're built for psychic communication. It's no wonder this is called the Aquarian Age. Everything is bumped up to a higher level where the physical is not so important anymore. But you had to have first known the physical, because it is part of the psychic connection phenomenon. In other words, you need a body, a form. It's the entire primordial. The form comes out, communicaton begins. Action out of nonaction.

The Aquarian sign represents so many structures that fit hand in hand with psychic development.
Intellectual, independent. The being who wants to learn about the spirit world has to be intellectual. It takes thought to be interested in something. And one has to have an independent self, not be a follower who only takes orders, commands, and others' opinions, such as intellectual dogma. One has to have their own self developed, to stand out from the others. That's the sign of a developed psyche. One who stands out. Not one who is submerged in the goop of the group around them. Curiosity. One has to have curiosity, ask questions, in their own self and of others and their ideas. Unlike some, especially in religions, where they don't ask any questions, but only slave after what is told them, and the slave accepts anything told them.

Creative. This sign because they are independent, intelligent, are creative. Once you have your own mind, you use it! That's where creativity comes from. From deep down inside. Not in imitating others. Imitation only shows lack of creativity. Imitation is a surface activity. Lack of depth is surface activity. So to be creative, you have to search your depths, with your mind and heart, the instincts get worked. Everything comes together. The whole being within the form works together. One has to have a well developed body. That takes energy, intelligence. Through oxygen, exercise, raw whole foods, rest and sleep, one becomes balanced in their physical form. That is productive of psychic communication, because now that the body has been tended to, and is at work metabolizing, then the spiritual side of the person can come to the fore, and be, and experience their world within and around them.

Detached unemotional exterior. Remember when you were a little kid, how your surface was a detached unemotional aspect of a being who was thoroughly immersed within in creative activities? Well, there you go. The Aquarian has the right idea. That child-like exterior. It's the separation of one's surface self from their surroundings so that they may have their personal inner world functioning. When one gets too close to their emotional self, it sucks you down into the lower levels, separates you from that functioning mind, and you just become some animal man with no intelligence about you. You're just ruled by emotions. That is not conductive of psychic abilities. Remember those people who were rooted to their seats while the animals fled in that tsunami? Hmhmhm. Yep. That's the result of a disconnection to your center. And the only way to have a connection to your center is by paying attention to it, to your inner world. Which requires some amount of Introversion. Which means becoming unattached to others in the exterior world, so that you honour your own self, and stay in tune with what is going on there. Otherwise you're just a boat without a rudder floating helplessly out in the sea, with no direction home.

But most importantly, they are non-judgemental, they accept everyone for who they are. They're not judging you on account of the clothes you wear or the house you don't or do own. Altruistic, balanced, fair, kind. Meaning they treat others as they would want to be treated. That's how they show love through their social skills. They don't like confrontations, meaning warring, jealousy, hatred, all those negative emotions which cut you off from your psychic senses, which too many people indulge in and think nothing of it. I've seen people jealous right in my face over something they have no right to even be jealous of, and yet they're so ignorant they don't even see it themselves. I suppose when you ignore one thing, then it becomes a habit and you begin to automatically ignore everything else, like an automaton. Like a dumb human animal only selfishly interested, even though it gets them no self victories. Hahaha. Such a joke. If only most people would just observe themselves instead of act like a dumb human animal unaware that they even have capacities to use, that are above the animals. I'm not talking about the animal kingdom, as we already know, they're the smart ones who ran away from the tsunami. It's those chirpy chit-chat people who stand around immersed in their surface selfish useless talk that gets them into deep trouble sooner or later. The unthinking ones. The unaware ones. Or those solitary anxious ones, frightened to open up because their insecurity drowns them, and so they're hooked ball and chain to their surface worried world with no thought to their deeper inner world which could free them from their miseries.

This Aquarian air sign, with very conrtadictory ideas and traits, are like the living impression of the spirit world which works upon this material world. Where they'll be next, who knows? It's a mystery. Theirs isn't the literal, boring, frightened "past-present-future," of the scared individuals who meld themselves to the material world. They are free like the spirit. Where the next symbol will appear, who knows? There are risks to take, adventures to go on, things don't fit literally, they move from "who knows where the spirit goes." The future may present itself into the present, and then an idea may come from the past to bring it on home to your comprehension that such and such a thing is taking place in this moment. Those who are unaware of how the spirit works, are lost behind. They don't get it. They won't be able to survive in the Aquarian Age. This place is an adventure, not a boring nose to the grindstone existence with no love of what you perform. You have to stay light and aware to be psychically advanced. And you need your psychic abilities to live in this Age, and in all the other ones, once you find out that was the entire main point of Mankind. To have his wits about him. Not be a slave to matter.


There's much more to the Aquarian personality that I'll discuss later on in this post.

If Pisces (the most psychic of the signs) is feminine, then Aquarius is masculine. If you put that in a body, then the Pisces would be higher emotion, that is, feelings, and the Aquarius would be higher mind (groups of thought forms instead of physical thoughts in the head one after the other like the silent speaking in the head). The Aquarius rules the nerves, a very refined structure and system that relates delicately communication throughout the entire body to the main control center. You. So, everything is fine tuned in this personality, to an exquisite crescendo of genius. For without the mind, there is no form, there is nothing. Remember Father? Where we all came from? It starts there. With the Mind.


I'm on the far other end of the spectrum, Aries Taurus, which is the beginning of the zodiac. A person doesn't necessarily have to be stupid when they are, what seems to be, just starting at the beginning of the zodiac. There is much we have to learn about our own development, and then extend our knowledge out to what our ancestors have left for us, otherwise, that knowledge becomes stagnant and all we're doing is living off someone else's efforts. We must strengthen our own minds, our own selves, these hearts of ours, in order to continue this great work which had begun a long time ago, and will go on for a long time yet to come. So anyone, who has any mind meditations for a long time about things they are interested in, should now share those thoughts with others in order to grow the whole.


Here's an excerpt from a book, "With the Adepts" by Franz Hartmann, Chapter 6. The Alchemical Laboratory:

"We went through a beautiful and broad corridor, all along whose sides stood finely executed marble statues representing the gods and goddesses of anitquity, and busts of the heroes of olden times. "These statues," my companion remarked, "represent the elemental principles and powers of nature, and they were thus personified by the ancients to bring the attributes of these principles within the conceptive power of the mind. None of the old Greeks and Romans, except the most ignorant, ever believed that Zeus, Pluto, Neptune, etc, were existing personalities, nor did they ever worship them as such. They were merely symbols and personifications of formless powers. Likewise, every man's form and body is not the real man, it is merely a symbol and personification of the character and attributes of the real man, a form of matter in which the thoughts of the real man have found their external expression. The ancients knew these things. It is only the modern wisacres who mistake the external illusion for internal truths, and the form for the principle. It is modern materialistic religion which has degraded the Universal Spirit into a limited being, and the great powers of nature into Christian saints."


Magnetic and Mesmerizing. Aquarians are magnetic because of the vast amount of positive spiritual traits all together within them. Who isn't attracted to all that's healthy and good for you? They exude health and beauty. There feels to be something about them that is very prominent of good. Of course, they do have to be positively aspected. Not all beings born under the sign of Aquarius are altogether whole in those aspects. It depends on each situation. But what I'm talking about is the general traits of this sign. They are so intelligent that it is mesmerizing to be around one. They don't have to talk a lot. It's the way they just know how to behave, that makes them so fascinating to most people. Intelligence, after all, is not only what you say. There is much more to it. It's the entire package. Everything interwined within the being in an orderly wonderful state of presence. Quick thinker, rational, analytical, focused, friendly, calm, introverted, dominant, mysterious. All these are Aquarian traits. Let us remember that we all have a part of Aquarius within us. All beings have all the signs within them somewhere. It's up to us to pull them out and begin to utilize them, what ever sign you are. Make the most of all your fine traits.

Time and The Inner Chronology .... Changing The Timeline Of Our Destiny 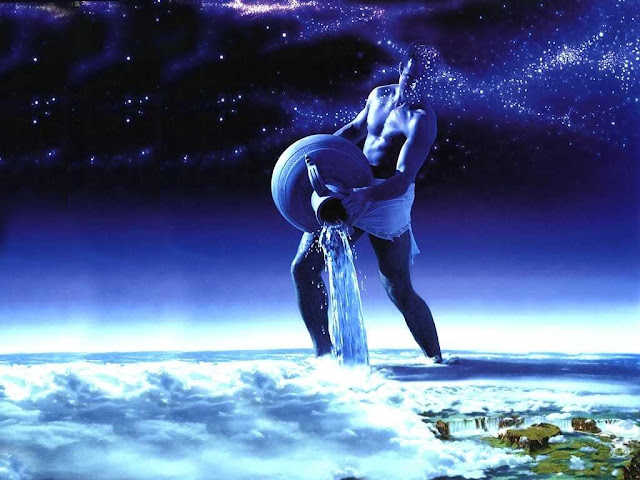