Four Beasts Of The Apocalypse

I'm, as usual, doing some researching and putting things together. This is some very interesting stuff I've uncovered. Look, there is a snake under the stone! Haha!


Ok. Yesterday we started with the Cassiopaean's transcripts which tell us about Jesus.  This is what they said:

Session 4, July 30, 1994
Q: (Laura) Jesus told us God loves us. Is this true?
A: (Cassiopaeans) But it is the soul that matters, not the body. The body dies not the soul.
Q: (L) Well, this whole thing just gives us the creeps.
A: No. You are energy. There is an energy that comes from soul and body connection; later the body is used for parts.
---
Q: (L) Will Jesus be reincarnated into a body?
A: No.
Q: (L) Is Jesus an alien?
A: One of us. ("Us" meaning 6th density, not necessarily "Cassiopaeans.")
---
A: Maybe. One at a time please. Stop thinking physical thoughts - they are low frequency.Q: (L) What do you mean by physical thoughts? Who is thinking physical thoughts?
A: Anything to do with body or animal like - minimize as much as possible - that raises vibration level.
Q: (L) Is vegetarianism then the way we should eat?
A: That is concentrating on the physical. The body is not important.
Q: (L) Does this mean that to worry about the body in any way is wrong?
A: Close. Don't concentrate on life in the body. Concentrate on the spirit.
Q: (C) Does this mean Laura should ignore her heart condition?
A: Don't worry about it. Treat the spirit.

(In Don Juan's words, 'oh poor little me' is what Laura is being. She is involved with "self-importance" and that is what every warrior MUST destroy within themselves before they can get any power from their within, which is what the Cassiopaean's are saying here too. Focus on the spirit, not on poor little me. Don Juan says, have no compassion for that is the way the poor little me wants everything to be around it, pitying its pathetikness, avoiding, denying, ignoring the true spirit. That is the epitome of living in darkness, or, oh thou blind god, 'yaldaboath.' The idiot creature thought that was his name when Sophia said those words. Ha! Those words, "oh you blind god" acutally in their weird language is pronounced or spelled 'Ya all Duh both' i.e. Yaldaboath. This kind of stupidity is what the sorcerers of Toltec tradition tear into and break down. When you don't tear into the self-importance then you arrive at a monster, such as Yaldaboath is. Now, one must attack one's own self as well, seeing that I am attacking this kind of behavior, I must turn around and look at myself attacking that behavior, and see whether I am in fact in the self-importance or whether I am in non-existence...which is called "stalking" self-importance in one's self. So, no Laura, I am not cutting YOU down, I am cutting down the animal which teaches that the body is so important that the spirit is thrown out with the bath water.)

Ok, now we go to Gurdjieff's work. In the book "In Search of the Miraculous" by P.D. Ouspensky, it says on page 295:

"In France when his pupils were studying dances and dervish exercises, Gurdjieff showed them exercises connected with the "movement of the enneagram." On the floor of the hall where the exercises took place, a large enneagram was drawn, and the pupils who took part in the exercises stood on the spots marked by numbers 1 to 9. Then they began to move in the direction of the numbers of the dance in a very interesting movement, turning around one another at the points of meeting where the lines intersect. Gurdjieff said the exercises of moving according to the enneagram would occupy an important place in his ballet, the "Struggle of the Magicians." He said, without taking part in these exercises, without occupying some kind of place in them, it was almost impossible to understand the enneagram.

"It is possible to experience the enneagram by movement. The rhythm itself of these movements would suggest the necessary ideas, and maintain the necessary tension, and that without them, it is not possible to feel what is most important."

There was yet another drawing of the enneagram which was made under his direction, in Constantinople, in the year 1920. In this drawing, inside the enneagram, were shown the four beasts of the Apocalypse---the bull, the lion, the eagle, and the man---and with them, a dove. These additional symbols were connected with "centers."
---

Ok, and now we go to the internet and type into google, "bull lion eagle man" and we come up with this:

Part 8: The Greatest Story Ever Made Up 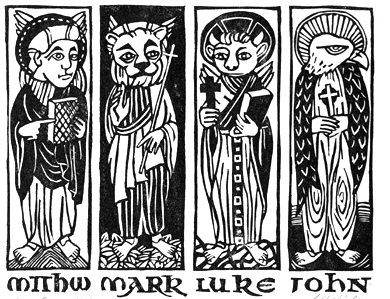 Above: As you can see, the Gospels were written by a man, a lion, a bull, and Sam the Eagle.

"In our last installment we've seen that the Pauline Epistles actually predate the Gospels in what they say about Jesus, and that what they say is limited and sketchy. Basically, if all we had of the New Testaments were the undisputed Epistles of Paul of Tarsus, all we would know about this "Jesus" character would be the following

As you can see, there's a few things the modern reader would see as missing. No mention of virgin births, of flights into Egypt, of Bethlehem or Nazareth, of twelve disciples or of Judas the betrayer or of empty tombs or a myriad of other details. So where the heck does that stuff all come from?

Well, as everyone knows, to get the full picture of the amazing life of Jesus Christ, you apparently have to turn to the Four Gospels of Matthew, Mark, Luke and John.

Unfortunately those same gospels are about as reliable on the topic of Jesus as a book by Dan Brown. Let's go through them from oldest Gospel to most recent, and examine each in detail."
---

Anyway, for all you who don't know what these four beasts are...they are from a book called the Kabala, which is not suppose to be written, only spoken...hence the teachings by the Toltec sorcerers that the mind of the predator is contradictory and morose. So these writings tell of 4 spirits that are just outside of the reach of physical, nevertheless penetrating through it, whereas we, as mankind, are only the expression of the crap they force upon us, which are, those beasts. The four of them in astrology are known as the fixed signs. Whereas there are four others who are cardinal and four others who are mutable.

So what you get out of that mix is, man as a puppet, performing everything out of those four fixed, foundational functioning entities. Or perhaps, Archons? Lizards? Puppeted by a bunch of creatures that resemble man by the fact they have two arms two legs, a head, and a stem. The copy of "Man." But ofcourse not the true Man, because Yaldaboath fashioned a garment out of the dirt, copying the beautiful brilliant egg-shaped light that came out of the roof of the black-whole-universe in which Yaldaboath dwelt as "the one and only god and there are no other gods before me."

And so Man came down onto this destination, donned the cloak of human, got split by Yaldaboath into man and woman, since Yaldaboath was searching greedily for more power more more more, and he figured he could steal it from that light, so he had to find a way to seduce that light to come into the dirt cloth he had just created, and hoped man would succumb. So Man succumbed and here we are, dressed in the rags which Yaldaboath fashioned, in imitation of what he saw come out of the 'heavens.' And so...

Guess where you are? That is what don Juan was teaching us. How to get back to the egg-shaped light that we truly are. To doff off from ourselves the human garment, and get back our magnificent conscience/awareness. Gurdjieff called it conscience, don Juan called it awareness.

The twisted tales of Belialith.

"You are energy. There is an energy that comes from soul and body connection; later the body is used for parts."


They EAT the light with the body. Hence don Juan's telling us what happens to the little children when they are born with a tight cover of awareness over them....