Discovery: Ramtha Is A Dimwit, A Stooge.

Pouring through this channeled guys books, I find, he is a fucking dimwit.

I AM SHIVA THE DESTROYER. I DESTROY RAMTHA.

There are so many contradictions he speaks, and such arrogance it's pathetic. How could this guy be a teacher, haha, of metaphysics? Has anyone experimented with the stuff he told you about, as in how the brain works? Well I would say that there is something wrong with his teachings. I think he's a hypocrite and a false teacher. Whatever he says you've got to be very careful of because I don't think he's on the line. You know what I mean? I think he's sided with aliens. Maybe when he ascended, if that's even a truth, but if he ascended, he probably got caught in a net, was electrocuted brainwashed and hypnotized so that he doesn't even know what the fuck he's talking about. If this guy was a real human, then he's in a real mess. And no one in that kind of predicament can be any sort of teacher.


Ok. Let's take a look at some of the things he has to say, in his books:


This excerpt is from "Ramtha, A Master's Reflection On The History of Humanity, Part 1".

Page 204 - "Is there a war of valued life? Yes, it is called AIDS. Are crossovers susceptible to this? Yes. Why? Because they do not produce life. That is simple. That is the law of nature. You don't like it? That is the truth. The statistics bear out what I am saying tonight. What is spiritual redemption? That if we have to fight and claw for our identity as a polarity of this or that then, God Almighty, how could we ever identify God without identifying a new agenda?"

And this is an excerpt from "Ramtha, A Master's Reflection On The History of Humanity, Part 2".

And do you want to hear how arrogant he is? He says in all his books how mauwch he looves us. But this is how he really is. He sides with the arrogant elite, the tyranny of the planet. He said he was against tyranny, and that's why he slaughtered all those people back in the Atlantean times...well, he's just another tyrant...he's not for destroying tyranny, he just wants to control and so he sides with the tyrants of this planet. Check it out. You can see it right in his words.

On page 125 of Part 2 - "And that is absolutely important because it has been those entities of sovereign power that have been able to use two great sciences -- sciences. First they already knew about a time machine. They have already built one; they already own one. So they can move, as we are going to learn today, in your time and tomorrow, along potential parallel times and with that, they could use the same time machine to project a parallel line that went all the way back to the ancient Egyptians, indeed those great priest-kings that the Gods gave their power over to when they left."

And on page 133 - "No great person of knowledge takes drugs. They drink wine and they smoke a pipe. Just go back in your history and find the great minds and ask yourself what did they do to relax from the heat of their labor. These people that control the world, that created those time machines -- are you out of your mind? -- they already know what anything other than that does. It does not bring on superconsciousness. It deteriorates the scope of one's reality down to the bare-bones emotions of action/reaction. And why did they do that? Because they consider you the scum of the Earth."

He calls the elite sovereign power (?) who stole from the people through lies, manipulation, disinformation, murder... he calls that sovereign? Ha! He's talking about the predators who don Juan of Carlos Castaneda's books warned us about, and here is Ramtha going on and on about their greatness their sovereignity their GOD nature. Hm. Hmhmhm. What a dimwit.

So, he goes on and on cutting people down and then he goes and raises himself up above them all by saying that a great person of knowledge only drinks wine and smokes a pipe. Well guess what Ramtha supposedly did in his past life 35,000 years ago? He drank wine and smoked a pipe. Ha! What an idiot. And look...he talks of GREAT priest kings? Ha! Those were the idiots who brainwashed the people into thinking whatever they wanted them to think so they could have control over them. He sounds really reverential toward them and those gods that left power with them....the LIZARDS. Do you know that he's talking about lizards? No, because he doesn't tell us. He doesn't want us to know just what kind of so-called  G A W D S  were there fucking around with mankind's brain.

You know why he isn't for Gnosis? Because he loves those lizard gods...what he calls them. I call them dogs. Those dogs/gods are actually ARCHONS.

And so now, he's here trying to teach us about how to tweek our brain. Geez Louise, I wonder what kind of plan those nutcase lizards have that named themself Ramtha and are oooh soooo loving toward us......

Oh there are plenty more contradictions in these books of his that I've been reading. Let me finish this Part II of Ramtha's rants and I'll go back collect them and write them out here.

Oh, by the way. This is the picture on the cover of the Part 1 of  Ramtha's Reflections... 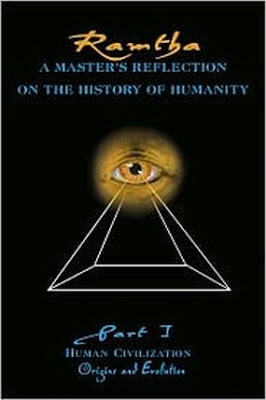 
Ohpe wait, wait wait. Have I got one for  you. Here's him asking to be WORSHIPPED.

It's from the Ramtha's Reflections of a Monster Part 1:

Page 282 - "Don't worship anyone, because worship is the action of ignorance."

Now do you understand what I mean by contradicting himself? A real teacher, clear and true, does not contradict themself.

It's not just what you put in your mouth to eat... a man lives by every word that comes out of his mouth. Hahaha....

Now here's an explanation of how that personality-character works. When Ramtha feels like he's being adulated, loved, adored, when he's in that fantasy world, as in page 153, then he tells them to worship him, and he gets bold telling them he has the power to become all things to them. That is like every romance before sex. Everyone who has ever been in a misty romantic mood and in a sexual context is going to have those kind of thoughts....that sweep them off their sane clear thoughts. Tomorrow it's a different story. They wonder how they could ever have felt that. So Ramtha is caught up in a romantic sexual mood which makes him to blab that bullshit out.

Then on page 282, he talks himself into a sweat thinking, oh my gawd, I'm losing them, ohpe, they worship other things..."Don't be a pagan, don't be ignorant, don't fear change...Don't be a pagan. Don't adorn yourself with meaningless bangles. Don't you know you worship them? Don't worship anyone, because worship is the action of ignorance." And there you have it. He's threatened by some pagans and bangles and thinks he's going to lose out on worship, so he contradicts himself out of emotional fear of losing all that adoration, and he spits out ... "don't worship anyone" and he has to make it firm so they won't be charmed away from him by pagans and bangles by adding ... "because worship is the action of ignorance."

But just earlier in the book we read, in one of his discourses that he wants you to worship him. Now how's that for a teacher who's teaching you to get rid of all your emotions and only use your mind. Hahahaha. What a hypocrite. He is not a teacher. He's a manipulator and only for selfish personal desires...not for anything that will actually be unconditional. After all, he gets an emotional thirll out of his so-called 'teachings.'

And will he tell you not to analyse things? Oh yea, because were you to do that then you would be able to analyse him and see what the truth is. In other of his 'shows' which they had on YouTube, he shouts out "Look at me." "Listen to me." Constantly. It's everywhere! I said they HAD on YouTube those shows, but they are no longer there. Perhaps suddenly after I ordered those books, and with my email address being belialith, a strange name for one thing so they must have looked up belialith, and for another thing, heck I ordered 9 books in one shot from them...so they must have looked on the internet to find my belialith on YouTube and saw how many 1 or 2 hour long shows of Ramtha yapping at the audience I had on a playlist. Next thing you know, I go to look at my Ramtha playlist and all of those 1 and 2 hour long shows were gone, deleted. Hm. So I had to wonder about that. What's left are measly little 5 or 6 minute, and in some cases 10 minute long spliffs of him babbling at the crowd and they're all under the company's direction. Now how monetary oriented is that? I remember little Prince the purple midget doing the same with his music, where he wouldn't allow YouTube to play any of his songs so there may be a video but no music to it, because all he was interested in was money, and in the meantime he was stealing it from others, such as in not paying musicians who he hired to do work for him. I personally met a sound engineer who knew these things from personal experience. Or he was cancelling large shows so the people were left in the lurch. You comprehend? When I read up on Ramtha and heard many people calling it a cult...I wasn't surprised when I found my own evidence, all over.

So in those shows, and in the books that they wrote his words down, word for word, he would shout at the audience..."Look at me!" "Listen to me!" Just like some little kid who is constantly seeking attention. And then he condemns everyone else for doing that very same thing, calling it a face-mask, an image that they are up-keeping. But he can't seem to shut his own words out...Look at me...Listen to me....Look at me Listen to me...Look Look Listen Listen...

Is he insecure that no one sees him, no one hears him? Why else would you shout those words out.

Posted by BELIALITH at 9:38 AM