Project Gutenberg Warning Us To "Beware of the TPP!"

Beware of the TPP!
Project Gutenberg is concerned about a new secret international treaty, the Trans-Pacific Partnership. This will extend copyright term protection worldwide, thus halting the growth of the public domain. To learn more, and join Project Gutenberg in speaking out against this treaty, visit The Internet Archive
And then from the Internet Archive Blogs, it says:


The Internet Archive joined Our Fair Deal along with EFF and Public Knowledge to stop the US from using the Trans-Pacific Partnership treaty from changing our copyright laws.   The coalition sent two open letters to TPP negotiators today on critical issues that you can learn about here. Let’s foster open debate and proper process before further changes to copyright laws restrict public access even more.
Please consider joining this coalition.

What is the TPP? Or what is the Trans-Pacific Partnership Agreement (TPP)?

The Trans-Pacific Partnership (TPP) is a secretive, multi-national trade agreement that threatens to extend restrictive intellectual property (IP) laws across the globe and rewrite international rules on its enforcement. The main problems are two-fold:

(1) IP chapter: Leaked draft texts of the agreement show that the IP chapter would have extensive negative ramifications for users’ freedom of speech, right to privacy and due process, and hinder peoples' abilities to innovate.
(2) Lack of transparency: The entire process has shut out multi-stakeholder participation and is shrouded in secrecy. 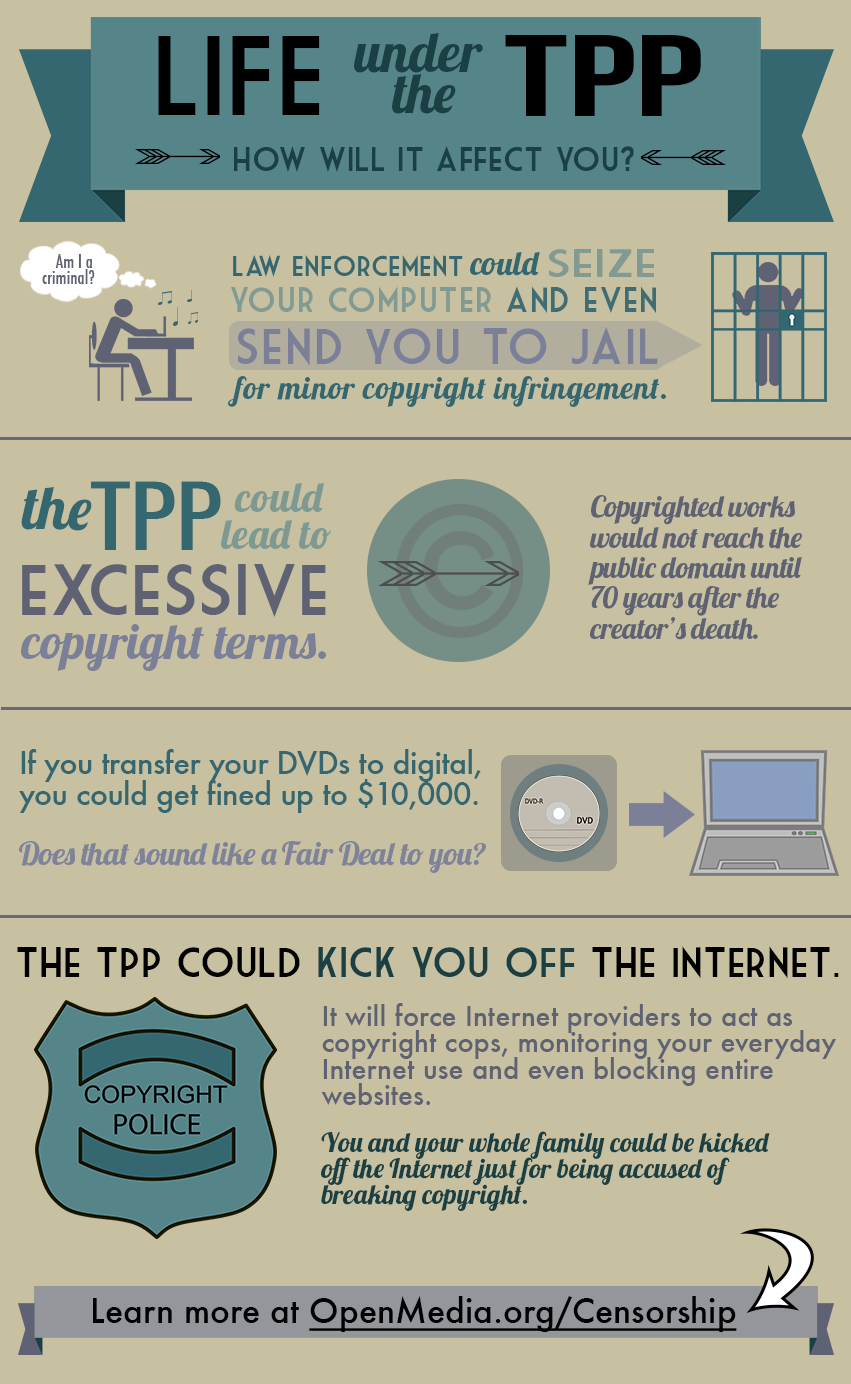 Non-Transparent and On The Fast Track
Despite the broad scope and far-reaching implications of the TPP, negotiations for the agreement have taken place behind closed doors and outside of the checks and balances that operate at traditional multilateral treaty-making organizations such as the World Intellectual Property Organization and the World Trade Organization.
Like ACTA, the TPP is being negotiated rapidly with little transparency. During the TPP negotiation round in Chile in February 2011, negotiators received strong messages from prominent civil society groups demanding an end to the secrecy that has shielded TPP negotiations from the scrutiny of national lawmakers and the public. Letters addressed to government representatives in Australia, Chile, Malaysia, New Zealand and the US emphasized that both the process and effect of the proposed TPP agreement is deeply undemocratic. TPP negotiators apparently discussed the requests for greater public disclosure during the February 2011 negotiations, but took no action.

Why You Should Care
TPP raises significant concerns about citizens’ freedom of expression, due process, innovation, the future of the Internet’s global infrastructure, and the right of sovereign nations to develop policies and laws that best meet their domestic priorities. In sum, the TPP puts at risk some of the most fundamental rights that enable access to knowledge for the world’s citizens.
-------------

NOTE: From the link where it says "prominent civil society groups" demanding an end to the secrecy, if you click the link you'll read this letter which I have here a portion of it excerpted:


Some Trans-Pacific FTA countries were involved in negotiations of the recently completed Anti-
Counterfeiting Trade Agreement (ACTA). International civil society objected to the secrecy
surrounding that process, and its draft texts were eventually widely circulated. Even the 153-member World Trade Organization (WTO) now posts country documents and negotiating texts on websites for scrutiny. Yet, to date, this practice has not been adopted in the context of Trans-Pacific FTA talks, even though the involved countries are all WTO members. Enhanced transparency in the Trans-Pacific FTA process has many benefits. Having the expertise of a more diverse array of informed observers with access to text can safeguard against errors and the risks posed by limited understanding of possible consequences of proposals. An open process could also build confidence among the public and parliamentarians that Trans-Pacific FTA talks will indeed replace the past trade pact model – through which benefits and privileges were bestowed on various special interests and large multinational firms to the detriment of many in signatory countries. In the past, nontransparent trade negotiations that are only made public after the final deals have been signed and sealed have had expansive implications for the daily lives of millions of people. If Trans-Pacific FTA talks are truly intended to result in a new model, then a negotiating process with greater transparency and regular access to draft text is necessary. This is the only way to ensure that those who would live with the results can have a meaningful part in the process. The special circumstances of Trans-Pacific FTA negotiations greatly increase the need for such openness. The current negotiations are premised on a process started in 2008 to add foreign investor protections and financial services regulatory limits to a Pacific-4 Free Trade Agreement (P4 FTA) existing between Singapore, New Zealand, Chile and Brunei. The P4 FTA certainly does not represent a new model for the 21st Century. And, especially in light of the global financial crisis, the prospect of adding new limits on financial regulation and new foreign investor rights to the P4 FTA is worrisome. Indeed, the scale and scope of the proposed Trans-Pacific FTA is expansive. All signatory countries would be required to conform their domestic laws and regulations to certain provisions with an enforcement mechanism that would allow indefinite trade sanctions against countries that fail to comply. Trans-Pacific FTA negotiations cover not only financial regulation and new rights for foreign investors, but limits on how an array of services relating to healthcare, energy, natural resources, culture and more may be regulated; how domestic tax dollars may be expended; what sort of food safety and labeling and quarantine policies will be permitted; and more. Citizens and legislators would never tolerate policymakers keeping secret the text of domestic legislation until it was passed. Yet, the Trans-Pacific FTA could require the alteration of wide swaths of our domestic policies under terms that do not facilitate later modifications as governments or public demands change. Indeed, the enforceability and permanence of such terms, with later changes to an adopted Trans-Pacific FTA requiring agreement by all of the
signatory countries, necessitate extreme care and complete transparency on the front end. Your USTR colleagues have confirmed that the investment and financial services texts initially developed during 2008 negotiations are being used as the basis for current negotiations. We request that these available draft texts be released immediately. Past requests by civil society representatives to our countries’ negotiators for access to these two texts has been met with the argument that some other country objects to such transparency and that is why our government (geez, I wonder what OTHER country they mean, huh? A tiny little country like the Vatican where the Assassins live? Or perhaps some other little country in England somewhere, or maybe another little country in the U.S. somewhere, huh? Or where ever the psychopaths like to hide out, no doubt.) cannot allow us to have access. The February Santiago negotiations provide an excellent opportunity for the Trans-Pacific FTA countries to agree together to make the draft investment and financial service texts available and to release other draft texts as they are created.
---------------------------------
I joined this coalition. This is the message I got afterward:


Thank you for standing up against TPP proposals that threaten to restrict the open Internet. Your name has been added to tens of thousands of people and organizations who have spoken out on this issue. Now we need you to help spread the word.

If you’re on Google Plus please quickly share it now »

Please also share this campaign by emailing this link: http://www.ourfairdeal.org/