From Wikipedia, (the medical dictionary**) the free encyclopedia

Single by The Who
from the album Who's Next
B-side
"My Wife"
Released
November 1971
Format
45 R.P.M.
Recorded
May 1971 at Olympic Studios in London, England[1]
Genre
Art rock, hard rock, progressive rock
Length
5:05
Label
Decca (US)
Polydor (UK)

The Who, Glyn Johns

Who's Next track listing


"Baba O'Riley" is a song written by Pete Townshend for the English rock band The Who. Roger Daltrey sings most of the song, with Pete Townshend singing the middle eight: "Don't cry/don't raise your eye/it's only teenage wasteland". The title of the song is derived from the combination of the song's philosophical and musical influences, Meher Baba and Terry Riley.[2]


It's an Airoplane, it's a monster!, it's a TRAIN!
Belzubub don't stop.
Here's the Recorded Version:
The Who - Baba O'riley 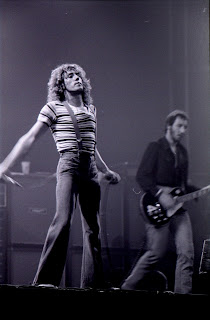 Shiiiiine ooooon you craxy diamant.
Nutmeg essential oil goes good with even Gin & Tonic. Just ONE drop. It's that good.

Posted by BELIALITH at 8:40 PM