Last night I had an exciting experience which is leading to a most wonderful discovery. I'm so excited about it.

I have been noticing something really fascinating happening lately. I think this, what I'm talking about, is the 4th dimension. It started last year or so, when one night I had an experience meeting that side of existence. I can't even describe what I experienced, lest I frighten some of you, and you don't need any more fear than you're already working to get rid of!

(Out Of The Fog - "You're all alike, scared, scared of your own shadow, that's why I get away with things like this Pop, cause I know that. If you did to me what I'm doin to you, you know what I'd do to you? I'd kill ya. Ya, I'd kill ya. You'd never have the nerve to do that. Here, it's easy, go on take it, TAKE IT. All ya gotta do is pull the little trigger and there's no more Garth. Go ahead Pop, go ahead. What's the matter, can't you do it?"
The Devil, The Sorceress, Everything SCARES you....AHHHHHHHHHHH!!! If you want to watch the movie where I got the excerpt from, click the link above.)

So, it was a unique experience. These black beings, a beautiful shiny black, and all kinds of different beings in the same place, or space, I don't know how to describe it. So I looked up in my Kabbala book on the tree of life and it said almost exactly what I experienced, about the 4th dimension.

Recently, like the past two days, I've been hearing the sounds of them in the fourth dimension, but they were here in this dimension, the one I'm in. Or we are in, haha, together. Like in a few posts down I was talking about a Robert Plant song I was listening to, and I was hearing some sort of discordant sounding bells or, I don't know how to explain, but, sounds that were enchanting. But I had also heard them (as in beings, not bell-sounds) outside, out of the window which is a few feet from me at the computer. As well as outside on the other side of the house through the other window. They sound like beings from a different dimension.

So last night I heard the same thing, but different sounds, but the same kind from the same dimension. And I remembered the sounds that I had been hearing recently and made the connection.
You have to be in a very loving state of being in order to hear those sounds or see things of a different nature, I have noticed. The more my love comes out and is exteriorized, the more that world comes around and frolicks, for lack of better word, with me. It's so beautiful, and they are all so utterly lovely.

I have two bathrooms and so when I went downstairs to get myself some more water or drink, I went to the bathroom there. I also have the lights on very softly. I do not like hard lighting. So it's a soft lighting in the bathroom too, and as I sat there I looked at the white terry cloth towel hanging on the rack, a flat rectangular shape. I noticed some soft greenish pattern emanating from it. And when I noticed it I looked a little more and saw that it seemed to have a pattern on it that you would see on fabric which is made by the textile companies. I said then it must be a reflection from my bath curtains which are a dark green, and the light was on in the shower with the curtains closed so it was giving off the soft lighting. But I reconsidered feeling I had, how to say it? Insulted? those beings communicating to me. So I said I'm just joking, because I could see clearly haha, there was no way those dark green curtains could make such a light bright greenish blue pattern above all, on my white towel.

That is when I said to myself, ok, I'm going to examine this. But I didn't say it in words, I said it as an intent, or feeling. So I started to look gently but focusedly on the towel, and oh my goodness, I saw the pattern come through, like I was looking into a different dimension, the towel and only the towel, now was like a damask piece of fabric hanging there on the rod instead of the towel. I could see the fine details of the greenish-bluish-yellowish pattern all over the material. The material was an off-white beigish colour with that turquoise like colour patterned all over it. It was astonishing, and it felt alive. Once I was there, everything felt alive like a different kind of aliveness than I'm used to in this 3 dimensional existence. It's just so beautiful. I want to go there and discover it.

Soon as I refocused my eyes it was back to the same ole plain white terry towel, with just the fuzzy colour turquoise interspersed all over the towel, so that would I to have focused my eyes again, I could have brought them to that place again. It's real. I tell you. Our mind is the most fascinating thing. Anyway, I looked on the internet for that pattern and couldn't find it so here are a couple of pictures that are similar but not the same. The pattern I saw was much more refined and delicate. The colour of the first picture, that bright turqouise is the colour of the pattern that was on top of the beige fabric. The other one is just a pattern of damask. 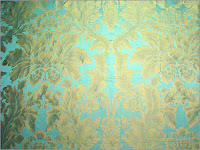 Ok, now, and today...I just had a cute little being peek out from behind my computer to remind me of the things I just saw today, so I'm going to tell about that too. Don't think of any form when I said cute little being, because there was no form. It was the feeling of the being come to remind me, and I said "cute" because it was helping me, reminding me of what I wanted to remember to write when I thought about it earlier. So, they're helpful. Thank you.
What I'm talking about now is, earlier when I had to go out to the store to get some more cream and brown sugar for my tea, the moment I stepped out the door, I saw like out of the corner of my eye something which I thought was something else, for when I looked, it was not what I thought it was, and it happened about three times in that span of time it took to get back to starting point. When I was almost home, I saw out of the corner of my eye a white slim dog sitting there, but when I looked, it was only the tall white pole with it's fat anchor to hold it in place for people who had a dog to tie up outside so as not to bring the dog inside the pharmacy, which is what place I was passing before I got home. So my thought was what Don Juan had talked to Carlos about when he said he, Carlos really had seen a creature screaming in its death throws but when he looked at it more closely it was only a big dead piece of driftwood, or whatnot. I don't remember the story exactly. So I thought to myself, this is that world Don Juan was talking about. When yesterday I saw that pattern on that fabric in that world, and in this world it is a white terry towel hanging on a rack. Same thing as I was walking down the street. Everytime I thought I saw something unusual, I looked directly at it to see, it was nothing but the boring reality that I'm used to seeing already, hahaha.
So now I know. When I want to go into that world, I must, like they spoke of in BASIC Instinct, hahaha, "suspend my imagination" to go into that other real world. OK!﻿
---------------------------------------
Today is Friday February First, 2013.
I, of course, went back to the washroom today, thinking to get another look at that phenomenon. And what do you think? the stangest of all things! Haha. I remembered a while back I had been reading parts of a book by a man who named Shape Power back into life. He said in some part of the book, that there is an exercise one can do, to replenish their energy. He said one puts their hand(s) down by their thigh of the leg side, part, and make a scooping motion bringing the energy up with you as your hand goes, and doing that a few tiems. He says the energy is seen by Seers, and that this energy is green and it runs like a river or a matrix of energy in that area of our atmosphere on Earth. So this live force which is green in colour is at the same level where I am when I'm sitting on the toilet. As I was looking at my towel, it was that green energy which was reflecting through me, it's living space.
Ah, but that's not the only thing I thought.
When I realized how much there was another thought with its reason, in the same place as when I thought it was the green energy, I immediately realized to stop thinking. It's all right. Everything's alll right now, baby it's all right now. Hahahahaaa ...aa  .
Posted by BELIALITH at 10:27 PM