Here's another event. You purchase tickets ahead of time, then haha, sit at home in the comfort of your own company! Great huh! I'm going! Hahaha. Definitely. (Nothing I love better than my own company. If only everyone were just like me! *hands pressed together, eyes up in ecstatic fervor). I like this guy. He's so intelligent. Brilliant thinker. Knows how to outwit the witters and uncover their secrets, hahaha hilarious. It's so funny some of the things he reveals. They must be fuming. No doubt, hahaha they are! Such as Hurly Clinton...she's already turning in her grave! 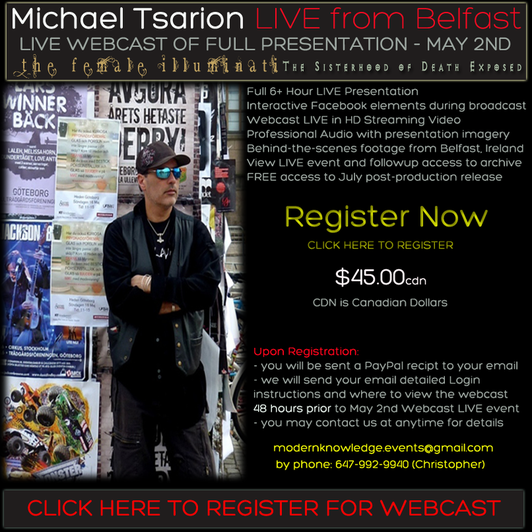 Right click the picture above and open in a new tab so you can view it much larger.


Wouldn't it be the most scary thing, to be revealed? Imagine that... it really wasn't the man who was Pa on planet Earth. It was always Ma, hiding behind Pa, who was pulling the strings. Geez, that's really dark. Imagine that? How would anyone have ever known? Hey, as they say, hmhmhm, the ruler of hell is a female!
Mother!
(don't need to wear pants, lol! got plenty all around!)


He says...."the plan of concealment, is a looong history, and it has worked very well, until now... The revealing is at hand."    (Hey, it has worked so well for so long. So why mess up a good thing?)

Are you sure? Really? Because you know, I don't think so, if you're not a woman. What do you know about women? I mean, how they behave, what they think, especially haha what they feel. Do you know? Then go right ahead and reveal, hahahaaaa... fer sure.

lol.lol.lol. almost computer lingo, hahaha the MATRIX! Geez. I knew that word would make sense eventually. Hahahahaa!!! ah, this is too fun.

Sorry. I was having TOO much fun. I shoulda known my own limitations. Anyway. I'm a woman, I should know...hahaha....but even I don't, so how can you? All you can do is trace the steps of an individual. Who knows? Hm? Maybe all women were pursued by the Alien, and that's how they learned to be so sharp, and stay hidden. Who knows hm? Who knows really. Let's do a little deeper digging into the history of the pain that most women endured, and not at the hand of another woman, hahahaaa. Let's put the focus in the middle and ask ourselves if we in fact aren't, all of us, the illuminati. But we keep denying it because this game is way too much fun to quit. Hahahaaa...
Ops I have to apologize again! I've let my self roam free. Oh! NO! OH NO MR. BILL!

Pursued unrelentingly, relentlessly! What are we? The Jewel of the Nile?

EL, it's all about women yes. To the point of insanity. If a woman could rape herself, would she? If Wisdom is wisdom, and it got raped... then what do you think is going to be hid? The falling from grace, the raping of Wisdom for one's personal self satisfaction, without any remorse, or thought about the deed which had been done. So here we are, the mystery looming still darkly over our heads. But in our minds, somewhere, were we to look around ourselves, we could see, "As Above, So Below," wherefore, what is it that's hidden? Ha? Nothing. Everything is right IN YOUR FACE. You just need to be able to, like a Shaman, ssssssseeeeeeeeee.

The worse of the worse certainly may be a female illuminati. But what created that situation to occur? You ask yourselves. If you're going to be remorseless on half the facts, then why don't you just start your next Witch Hunt, and get it over with. Then you could say, "you see? for sure it was a woman who did it. After all, we just killed them all. Isn't that enough evidence?" Dense. But not evidence.


P.S.t
I was only joking. Haha. I don't care if you reveal who the creator of this universe is.
Do whatever you want. I'm just here to enjoy and have fun.
By the way, I'll be there
listening.
I enjoy this man's work.

Posted by BELIALITH at 3:02 AM